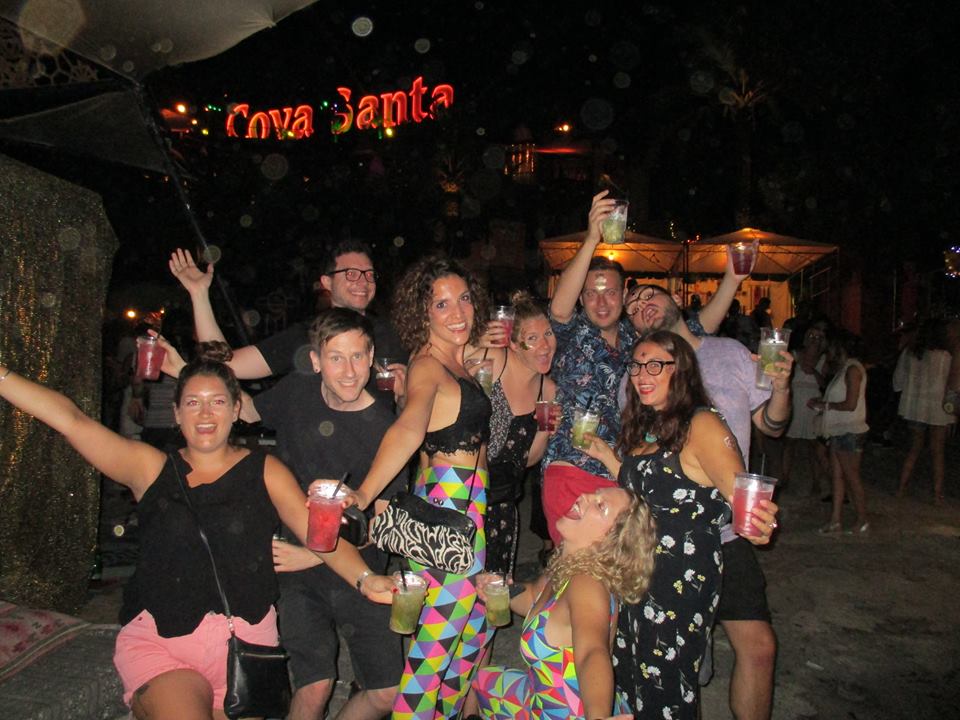 This year one of my favourites turned 30 and to celebrate we did something I have wanted to do since I was a teenager – we partied on the beautiful, sunny island of Ibiza.

We went for just under two weeks and spent the first half in Villa Gracie, which was set a little way back but within walking distance of San Antonio Bay. The perfect place, as a group of 10, to spend days by the pools and nights firing up the BBQ.

For the second half, Dan and I moved just a few minutes down the road to an apartment in Port de Torrent. Set in a cove, this area is calm and quiet – a whole world away from its neighbour San Antonio but conveniently it was just a short boat ride to get there. This boat departed from the beach which was a two minute walk from our accommodation, offering us the best of both. As well as lazing by the pool and on the beach, across the two weeks we also went parasailing – which was a surreal but incredible experience and provided amazing views as we looked back down on San Antonio.

We hired a boat for a sunset cruise which, with the music blaring and the drinks flowing, took us from daylight – so we could explore some more of the islands coastline and cool off in the water, to night where we moored up by Cafe Mambo.

We joined Craig David at Ibiza Rocks for a pool party where he brought the “freshest garage vibes” with his classics as well as a few surprises thrown in.

A couple of times, both as a group and later on our own, we made the short journey over to Ibiza Old Town. As well as sampling some of the most delicious tapas and sangria, we explored the narrow, winding, cobbled streets and made our way up to Dalt Vila – a UNESCO world heritage site with panoramic views across the town and sea.

From here we also took the short boat ride over to Playa den Bossa (where the super clubs are) to see it with sober eyes in the daylight. The most notable restaurant we went to was Sa Capella, an old converted church in San Antonio.

Of course, you can’t go to Ibiza for your 30th birthday and not got to the clubs. We went to Glitterbox at Hi – which has recently been refurbished and comes complete with a ‘disco loo’ – so you can still party while you pee! We also went to Woo Moon at Cova Santa which was up in the mountains and had a very festival-y feel to it. Although with the clubs charging €20 for a single vodka and bottles of water costing €12 each – it isn’t the cheapest night out, but it is definitely worth it! And, of course, we also had to pop into the world famous Cafe Mambo for a drink.

Getting around couldn’t be easier, as well as boats regularly ferrying you between destinations, you can hop on a bus for very little. Which is handy because there is plenty to see and do. It might well be renowned for being a party island but there are two sides to Ibiza and as well as this it also has a calm, tranquil side. In fact, my parents are going next year and I can’t see them stumbling out of Glitterbox at 7.30am – although I might be wrong….

I hope to go back one day and explore a little bit more of this beautiful island and its stunning coastline.