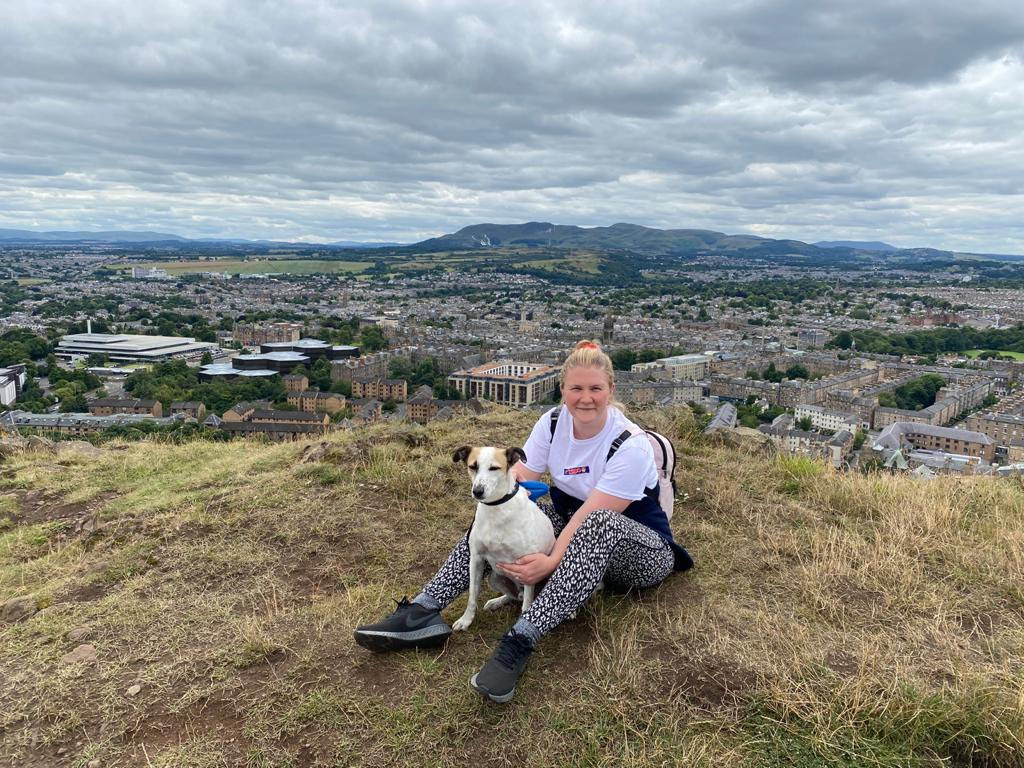 Alongside many others, we have spent much more time exploring the UK over the last couple of years. A big benefit of this is being able to take our pooch with us. Alongside glamping in Norfolk and staying above a cosy country pub in the Peak District, we also went on a few city breaks.

In July we went on the train to London for a long weekend to celebrate my birthday. Then, towards the end of the month, we replaced a cancelled festival with a road trip to Edinburgh – stopping at York for a night on the way to break up the journey – and the edge of the North York Moors on the way back.

Edinburgh was actually named as the UK’s most dog-friendly tourist location for 2021, according to dog food company tails.com. This was based on criteria including accommodation, green space availability and pubs & restaurants which allow dogs.

We also ended up visiting Cardiff in October – ticking off another capital city this year.

As people fussed over him during our trips, they also asked us how we were finding having him with us as many told us they had left their pups at home. So, if you’re thinking about taking your pooch for a city break, here’s what you need to know…

Tip: You only want to take the essentials, especially if you are going on public transport. So, make sure to check what your accommodation provides for your pooch. Some may not offer anything while others may have everything your pup needs.

We drove to York, Edinburgh and Cardiff – popping his bed in the back of the car to make sure he was comfy and stopping for lots of toilet breaks and leg stretches on the way. Once we arrived, we pretty much walked everywhere.

We went to London on the train and then used the tube and taxis to move around the city.

Tip: If you go on the tube, dogs should be picked up on escalators as it can hurt their paws. You may also want to avoid rush hour, especially if your pup isn’t used to the tube as it is hotter and busier, which can make it much more stressful for both of you. If getting a taxi, just make sure they will take your dog. We found most did (especially black cabs) – but not all.

Where to stay: dog-friendly hotels

There were plenty of lovely dog-friendly hotels to choose from. Here’s where we stayed.

London: The Pilgrm in Paddington. This one is right next to the station, ideal for catching trains and tubes. It has a small park alongside it, perfect for your pups morning and evening wee. It’s also a short walk from Hyde Park and provides a dog bed as well as a food and water bowl.

York and Edinburgh: Moxy York and the Moxy Edinburgh Fountainbridge. In York we were a few minutes walk from the Shambles and in Edinburgh we were around a 20-minute walk from the historic Grassmarket. In York the bar had board games which we played while sipping a cocktail and in Edinburgh we took in views across the city from the rooftop bar – both of them allowed your pooch to join you. There is a car park nearby with a discounted price for guests.

Cardiff: Novotel – which is around a 20-minute walk from the city centre. This hotel had a pool, which was a lovely way to start or end the day. Dogs aren’t allowed in the bar / restaurant here, but you can leave them in the room as long as you are on the premises. There is a car park on-site.

Need to know: You may have to pay slightly more for your dog to stay in your hotel room with you. The Moxy, for example, was £20 which we paid on arrival. This was a one-off fee, so the cost is the same whether you are there for one night or one week.

Where to eat and drink with your pooch

We ate breakfast and dinner in our hotel restaurants so that we could either take our pup with us or leave him in the hotel room for a short amount of time. We also ordered several takeaways to the room.

When we went out to eat, we found he could sit outside almost all restaurants. However, while some allowed him inside, not all did.

Here are just a few of the places we went for food throughout the day:

J Pizzeria in Primrose Hill (London): situated on a picturesque street and serves the most delicious Italian food.

Marco’s Cafe, Barry Island (Cardiff): take a seat and look out to sea from this cafe that featured in Gavin and Stacey. So dog-friendly there is even ice cream for pups on the menu.

Stonegate Yard (York): has a cute Mediterranean-style courtyard and incredibly tasty food on the menu.

Mussel and Steak Bar, Grassmarket (Edinburgh): this restaurant was pretty expensive but definitely worth the money. We had to move inside and our pup was allowed to come in with us.

Hula Juice Cafe, Grassmarket (Edinburgh): serves up the most mouth-watering healthy dishes. I had a smoothie and avocado on toast for brunch.

Biddy Mulligans, Grassmarket (Edinburgh): we went here for a cooked breakfast and would highly recommend it.

The Cafe at the Palace, Holyrood Palace (Edinburgh): after a long walk we stopped here for a drink and scone.

If you’re taking your dog it’s worth doing a little bit of research or keeping your eye out as you explore, so you know where you can go.

What to do in a city with your dog

You won’t be able to plan any activities that aren’t dog friendly, of course and may not be able to be as spontaneous as you might be without them. But, we found plenty of things to do and it was so lovely to have him with us.

London: As we had the pooch with us, we made our way straight to the parks and did a lot of walking. We wandered around Hyde Park, through Regent’s Park and alongside Regent’s Canal where our pup came face to face (across the water) with the African hunting dogs at London Zoo. We also went to Primrose Hill and enjoyed views of the city skyline.

England were in the Euro final while we were in the capital. So we wandered along the River Thames, from London Bridge to the Southbank soaking up the lively atmosphere. Even when the Euros aren’t on, it’s a great walk to take your dog on as you see some iconic sights including The Shard, Tower Bridge, Big Ben and the London Eye. We found the grassy area outside the Tate an ideal place to stop for a glass of Pimm’s / bowl of water as we looked across at St Paul’s Cathedral.

York: We only had one night in York so we wandered along and around the Shambles – one of the best-preserved medieval shopping streets in Europe. Fun fact: the cobbled street is believed to be the inspiration for Diagon Alley in Harry Potter.

Edinburgh: I went on a festive trip to Edinburgh a few years ago to visit the Christmas markets. It was nice to head back and explore again when it was a little warmer and do a few things I missed last time. As well as wandering around the city and seeing the sights on foot, we hopped on the sightseeing bus (yes, dogs are allowed on it!) We also walked up Salisbury Crags alongside Arthur’s Seat and joined ‘The Dark Side of Edinburgh Walking Tour.’

Cardiff: As we only had one full day in Cardiff, we drove over to Barry Island and walked along the beach and out to Friars Point. Despite it being October, it was warm and sunny. Our pup loved walking along the beach and we enjoyed seeing where Gavin and Stacey was filmed.

Cities have so much to explore, are full of pet-friendly places and are easy to travel around with your pooch – there really is no need to leave them behind. So, which city are you and your four-legged friend going to visit together first?