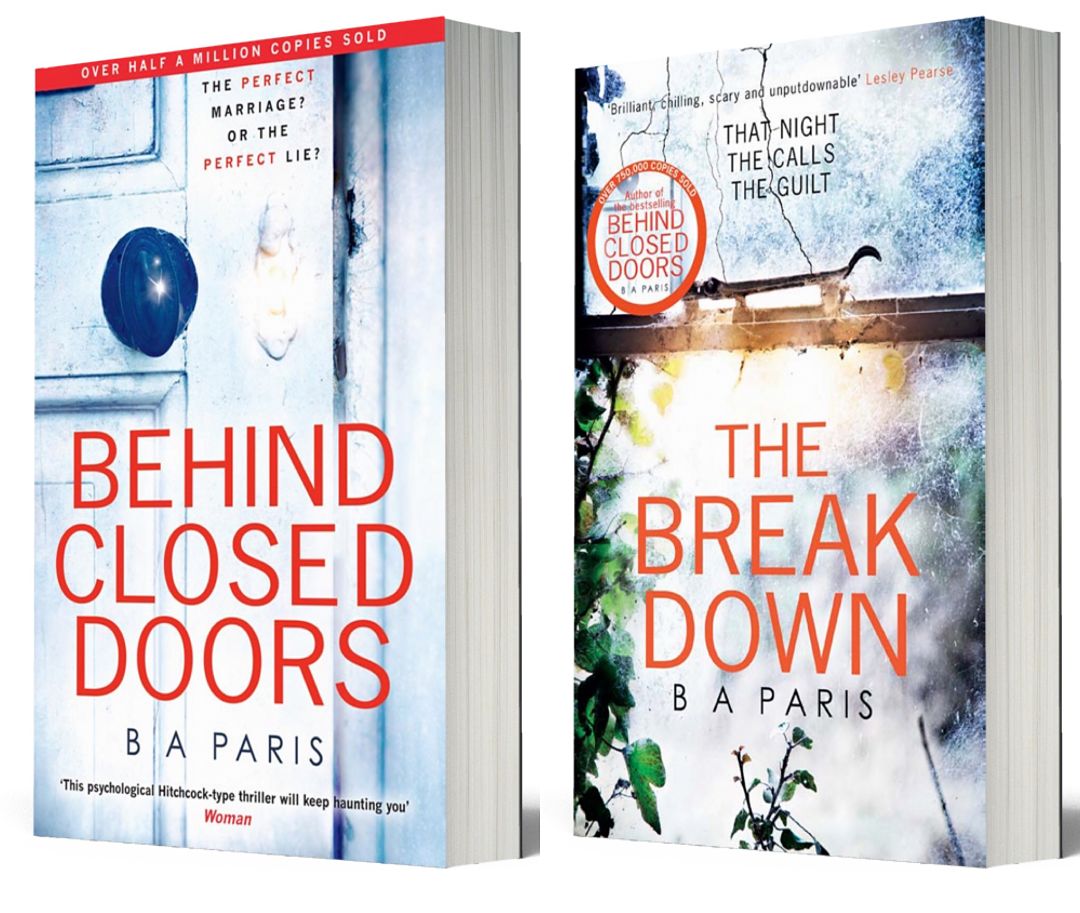 Have you read Behind Closed Doors? If you haven’t, you should! It was so gripping I couldn’t put it down – luckily we had recently started a lunchtime reading club at work, so I didn’t have to. As soon as I finished it I was lending it to anybody who hadn’t read it and raving about it to anyone that would listen.

It was the debut psychological thriller from author B.A. Paris who recently brought out her second book, The Breakdown and is currently writing a third.

So, who better to talk books with than the author of one of my favourites…

Many a female writer has penned their novel under their initials to avoid gender inequality, did this play any part in your decision to use your initials over your name?

No, I chose to use my initials because my name is Bernadette, which I thought was a little long to put on the cover of a book.

Did you always know you wanted to be an author? How did you first get into it?

I always knew I wanted to write, it was just a question of when. I thought I’d write children’s stories but when a competition came up in a national newspaper, one of my daughters encouraged me to write the 80.000 word novel they asked for. It didn’t win but I found I couldn’t stop writing.

What was it about thrillers that enticed you towards that genre?

What would a typical writing day look like for you..?

I start writing in the morning, as soon as I’ve had a cup of coffee and I’ll write until I realise that I haven’t had any lunch, usually around 3pm. Then I’ll have something to eat and write again until the evening. I always intend to go for a walk at some point during the day, but I never do!

What is the hardest part of the writing process – and, also, which is your favourite part?

The hardest part usually hits at around 40.000 words when self-doubt sets in and I think that everything I’ve written is rubbish. My favourite part is when I see the finishing line galloping towards me and know I’m going to be able to write The End very soon!

What inspired your first two novels?

I wrote Behind Closed Doors because I had a friend who I felt was being controlled by her husband. For The Breakdown, I was driving home through some woods during a huge storm and I wondered what I would do if I someone who had broken down. If it was the middle of the night, would I stop or would I drive on? I thought it was an interesting dilemma and I took the story from there.

Did either differ far from what you first imagined?

Behind Closed Doors turned out to be much darker than I imagined. The Breakdown turned out more or less as I presumed it would.

Was it more daunting to release your debut novel or the follow up one – did you expect the reaction you got from it?

I am 7000 words into attempting to write a novel myself, what would your advice be to a new writer?

Never give up! Carry on writing and if you feel that some parts of your story aren’t working, don’t be afraid to scrap them. It’s hard when you’ve written a scene that you love, but if it isn’t moving the story forward it’s better to put it aside.

How do you go about finding a literary agent / publisher? Did you face much rejection during this process and if so, how do you deal with that?

Whenever I finished a book, I would choose a few literary agents to send my manuscript to. Everybody gets rejections, the trick is to deal with them in a positive manner. I’d allow myself to be disappointed for about two minutes, then I’d start another book. Once you’ve found a literary agent, they’ll try and find a publisher for your work. Some publishers will accept manuscripts directly but you’ll need an agent at some point anyway unless you feel up to negotiating your own contracts.

Do you get much time to read and what do you like to read?

I don’t get much time to read and when I do I usually end up reading psychological thrillers because other authors are kind enough to send me their books to read. What I really love reading are huge sagas by Wilbur Smith or Leon Uris. I’d love to read Game of Thrones but I doubt I’ll ever have the time;

I have too many favourite books to choose just one. Likewise with authors!

As I was reading Behind Closed Doors I thought it would be perfect for the big screen – anything in the pipeline? Is this something you would like to happen?

Behind Closed Doors has been optioned for a film but that doesn’t mean it will ever get made. If it does, I’ll be intrigued to see my characters brought to life on screen!

You are working on book three.. anything you can tell us about this yet?

Bring Me Back is another psychological thriller. It tells the story of Finn, whose girlfriend disappeared twelve years before. He told the police the truth about the night she disappeared – just not quite the whole truth. Now he’s moved on – but his past won’t stay buried.