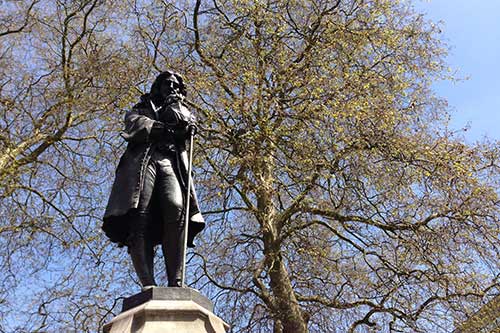 Bristol played a major role in the transatlantic slave trade in the 17th and 18th centuries. Today, many of Bristol’s buildings and some education and economic institutions are a tangible legacy of the wealth created by trade in slaves and slave produced commodities.

The migration from the Caribbean to Bristol has made the city’s population culturally diverse. There are many people of African- Caribbean descent living here today. It has been estimated that one in five Britons has a black ancestor from the 17th or 18th centuries.  The contributions they make to the life of Bristol are wide and include many cultural ones, enjoyed by the black and white population alike.

St Paul’s Carnival, one of the largest in Britain after Notting Hill, takes place every July. It is a huge celebration of African-Caribbean culture and is an important part of the city’s cultural identity.

Black artists of African and African-Caribbean descent have been contributing to Bristol’s thriving art scene for many years. Some of their work is about the city itself, reflecting on the experiences they have faced or commenting on local issues.

Bristol band, Massive Attack used their position to voice opinions on behalf of local communities, refusing to play, for example, at the Colston Hall because the hall is named after Edward Colston, who was linked to the transatlantic slave trade. There was a debate over Colston hall, in Colston Street, to change the name, however a poll by a local paper, resulted overwhelmingly in favour of keeping the name.

In September 2009, a Bristol campaign group called for a plaque to be put on Colston Hall to show the name is tied to the slave trade. Some believe the name of the hall should be changed, arguing it is offensive to pay homage to someone who profited from slavery.

But the Bristol based group Race (Remembering Africa’s Contribution to Europe) wants the name kept as a reminder of that part of history but with a plaque to acknowledge the Africans who suffered and died as a result of the trade. The group wants to look at ways to address this issue, giving a more positive outcome rather than the negative.

The name keeps it in mind, renaming it erases that history. It is an established part of the landscape and history of Bristol. Changing the name would be to tamper unnecessarily with the city’s past and its established place names.

Sue Giles, Curator of Ethnography and Foreign Archaeology at Bristol City Museum and Art Gallery, says it is better to have history out in the open, rather than edit out the bits that we find unsavoury today. ‘If Colston no longer has a statue, a street, a hall, then no one would know about him and his role in the city, including in the slave `trade. Better to know that and discuss it than ignore it and pretend it never happened.’

Many places in Bristol are named after Edward Colston and John Cabot, including ‘ColstonGirlsSchool’ and ‘Cabot Circus’, both were involved in the slave trade. However, there has been much debate surrounding whether this is appropriate. In the centre of Bristol stands a statue of Edwards Colston, erected by the people of Bristol in 1895, the statue idealises him as a respected and charitable Bristol merchant, however, makes no mention of the fact he was a slave trader. In 1998 when information about Colston’s involvement in the slave trade became better known, the statue was vandalised. There was a public debate, over whether the statue should be taken down or whether a more truthful inscription should be added.

Guy Naylor, a White student living in Bristol, says ‘I don’t feel it is necessary to commemorate individuals who were personally responsible for the atrocities of the slave trade; however, the development they brought to the city was fantastic and has allowed it to grow for future generations.’

Among all the monuments to the slave trade leaders, there is one memorial to a slave. A bridge in the centre of Bristol is named after Pero, in memory of all the enslaved Africans that were traded by Bristol Merchants. The plaque beside the bridge dedicates it to him. However, it is widely believed that a bridge does not stand as a proper memorial to the many thousands who were transported into slavery on Bristol slave ships.

Many people, especially young black Bristolians, would like to have the contribution their ancestors made to the prosperity of Bristol to be properly acknowledged. The suffering and sacrifice of enslaved Africans has never been adequately honoured.

Lucy Appau, a black student living in Bristol, says ‘people from the Afro-Caribbean community are more likely to be aware of the Bristol’s slave trade history, but the general population, I suspect are quite ignorant to it, and more likely are uninterested anyway.’

The Festival of the Sea in 1996 was an example of how some of the institutions that run the city have failed to understand the people of Bristol – they celebrate Bristol maritime history and ignore slavery. The centrepiece was the launch of the replica of John Cabot’s ship, the Matthew. His voyage in 1497 opened the way to the genocide of Native Americans and colonisation.

Sue Giles says that ‘very few people understand the slave trade and how it worked. Many know of the city’s slaving past, but few know the economics of it. Because it was something that ‘everyone knew about but no-one ever talked about it’ many people know the myths but not the facts.’

Efforts are being made today to educate the people of Bristol about its slaving history. In 2007, the British Empire and Commonwealth museum had a two year exhibition called ‘Breaking the Chains’, which told the story of the slave trade. There is also ‘The Bristol Slave Trade Walk’ which visits 42 sites connected to Bristol’s involvement in the trade, and the anti-slavery movement in the city centre.

Bristol remembers slavery in various different ways. Lucy says ‘it is important that we are reminded of events like slavery, in order to make sure that mistakes are not repeated and so that we don’t allow these things to happen again ever.’